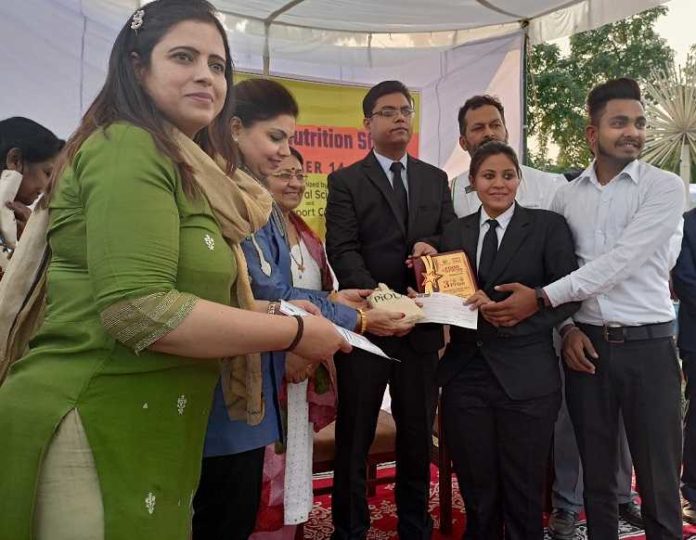 Kapurthala | Pushpa Gujral Science City in collaboration with PunjabAgri Export Corporation Ltd. organized Food & Nutrition Show to bring awareness on healthy eating habits. Sh. Mohammad Tayyab,I.A.S Special Secretary, Department of Finance Govt of Punjab was the Chief Guest at this occasion. He said that creating awareness amongst consumers about the benefits of eating healthy and the science behind safe foods would lead to optimum utilization of resources as well as cultivation and production of better quality food products. Further, India has the largest number of organic food producers and is ranked the ninth largest in terms of the land dedicated to organic agriculture, however, organic food market in India is growing as the awareness about organic foods is still low and is limited to consumers in metro cities, he added.

Dr.NeelimaJerath, Director General Science City giving introductory remarks at the occasion said that Food, Health and Nutrition are an indispensable part of life. Further, making healthy food choices, eating nutritional food and savouring the diversity of food which our country has to offer, needs to be inculcated in the society. The benefits of traditional grains and crops, the release of aromatic compounds while cooking and the retention of vitamins and minerals in raw and cooked food as well as the science behind healthy food habits also needs to be effectively communicated amongst the masses, she added.

Mr. Ranbir Singh, General Manager, Punjab Agri Export Corporation Limited (PAGREXO) and Chief Executive Officer, Punjab Agro Juices Limited was also present at this occasion. He informed that PAGREXCO has created a base of 5,000 farmers with an area of 15,000 acres under organic certification regime where organic food is grown in compliance with Organic standards of National and International standards.
Speaking at the occasion, Dr.Madhu Gill, Consultant Organic, Punjab Agro said that organic programme is being implemented in Punjab by providing institutional support to the farmers desiring to shift to Organic farming starting from production, value addition and marketing. She further informed that the farmers are provided with Training, Guidance and Technical Support for Organic practices by the trained team of Field staff for Certification regime.

Dr. Rajesh Grover, Director Science City delivering vote of thanks at the occasion said that theshowaimedat providing a platform for all inspiring chefs who wish to carve a niche for themselves in becoming a food expert even without obtaining any formal training.

The show also marked organization of competitions on Nutritious Street Food and organic Food Bazar for students of Hotel Management/home Science and Housewives with the motto to change the perception about street food. Chef Vishavdeep Bali and Chef NelluKaura were the judges of the competition. The Winners were awarded with cash prizes.
Result of the Food Show : In a student s category first prize has been achieved Mr. Bhavik Agrrawal from CT university, Arshdeep and Akshita from KM jalandhar clinched the second prize and Akanksha and Shivam from IKG PTu received third prize. In a House wife/ Other Category Aruna, Varun and Savita received first, second and third prize.

Ms. Harsimran Kaur from Hindu Kanya College Kapurthala and Amitoj Bedi from Rayat and Bahra Group of Institutions were the winner of online Art and Science Compactions also awarded on this occasion .

PUNJAB CM ORDERS SPECIAL GIRDAWRI TO ASSESS DAMAGE CAUSED TO CROPS AND HOUSES IN TARN TARAN DISTRICT DUE TO HEAVY RAINS OVER PAST 24...

Photography is meditation for this Railway Babu!